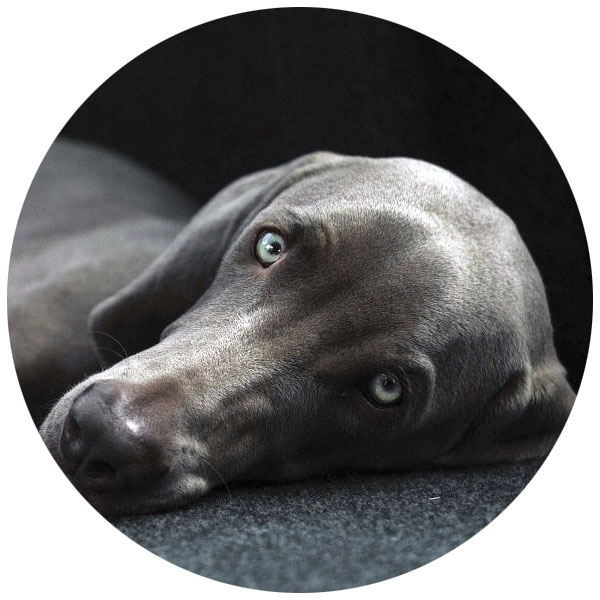 What is a arthritis and how is it treated?

Arthritis (Greek ἀρθρῖτις arthrítis, plural arthritis; from arthron “joint, limb” and ending -itis to denote inflammation) or joint inflammation is an inflammatory joint disease. This term must be clearly differentiated from degenerative changes (osteoarthritis). Arthritis is a heavy burden on the dog’s body and, depending on the degree of inflammation, has a strong effect on the ability to move and, of course, on the dog’s mind.

Furthermore, a joint inflammation can cause severe swelling in and on the joint, which further limits the agility of the affected joint. Inflammation of the parts surrounding a joint is known as periarthritis (formerly also periarticular fibrositis and fibrositis of the joint envelopes). Inflammation of the dog’s joints is not age-dependent and can be attributed to various causes. The various forms of arthritis are therefore broken down into further sub-areas, which we describe below.

The three main causes of arthritis

An Arthritis can be caused by a bacterial infection in the joint arise and therefore speak the vets in this form of joint inflammation also of a bacterial arthritis. The cause of a bacterial Arthritis is based primarily on the penetration of pathogens in the yoke and in the joint cartilage. Often, such infection is a clear sign of a weakened immune system of the dog. The bacteria can be on different paths in the joint inner room and there is a trigger inflammation. For example, a bacterial arthritis a violation near the pivot or be preceded by the excitation will reach the joint on the blood circulation of the animal. The bacterial Arthritis may be particularly in the case of a strong pus education as critical because this joint cartilage in the worst case is damaged.

If an unnoticed fungal disease is located in the body of the dog, it can also lead to arthritis and then of a mushroom-induced arthritis is spoken. In particular, various intestinal mushrooms, such as yeast fungi that can use the time in the body of the dog to grow and also the joints affected by the disease, which is strength of inflammation in the joints can form. Also with this by a fungal proliferation induced form of arthritis there is a significant risk for the joint cartilage and therefore also for the joints.

The Rheumatoid arthritis is not caused by a bacterial infection or fungoid triggered but is a misdirected immune response of the immune system of the dogs against alleged and wrongly interpreted foreign bodies. In most cases swells in the rheumatoid arthritis the joint mucosa significantly, making the joint cartilageno longer sufficient on the synovial fluid (joint grease) with joint nutrients supplied. By means of a rheumatic arthritis-related table can therefore also be a cartilage wear in the affected joint of the Dog. 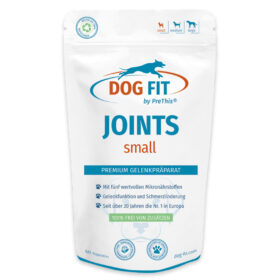 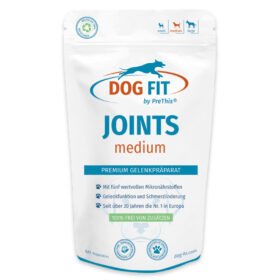 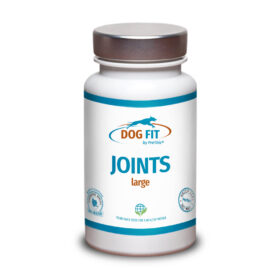 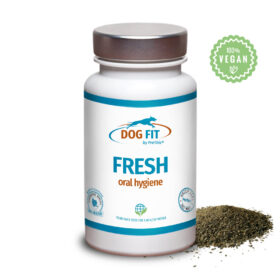 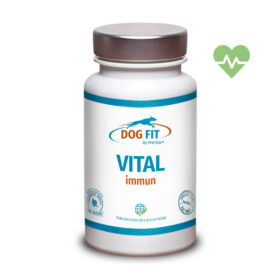 In order to treat arthritis, it is first and foremost necessary to clarify which form it is. It must then be ensured that the inflammation foci are alleviated and the joint cartilage is also optimally supplied with joint nutrients.

The joint nutrients chondroitin and MSM have proven to be particularly effective for relieving inflammation and pain. If the chondroitin and the MSM are also administered in combination with glucosamine, as in our DOG FIT by PreThis® JOINTS, the joints are supplied with an optimal mix of natural joint nutrients in order to get a grip on arthritis.