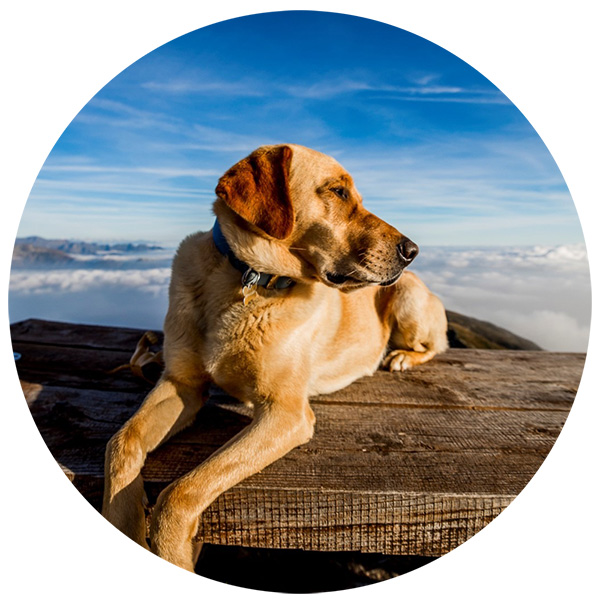 Incontinence is very unpleasant for your dog, just as it is for us humans. If your otherwise house-trained fur friend suddenly loses droplets of urine, sometimes lets out a large puddle or faeces and seems quite unconcerned, or wets himself or defecates in his sleep, this is a clear sign that something is wrong.

It can be bladder or muscle weakness, castration, but also a slipped disc or an incipient or already acute spondylosis (spondylosis deformans). In addition, the ageing process is accompanied by a decline in the function of the nerve cells. In many cases, the nerve tracts are responsible for incontinence, regardless of the previous disease associated with it. In dogs, however, it very often goes hand in hand with spondylosis.

What is spondylosis? Spondylosis is a pathological change in the spine in which first calcifications and then bony connections form between the vertebrae. Many dogs can live with it quite well, even unnoticed by the dog owner, but it can also lead to secondary symptoms such as incontinence, paralysis, tremors or coordination problems. These symptoms are triggered by the nerve tracts damaged by the ossification of the spine.

If you notice these typical symptoms of a reduced nerve function or a nerve disorder in your dog, it is necessary to act quickly and take measures to strengthen and regenerate the dog’s nerves. The first thought is often to go to the vet. Depending on the severity of the symptoms, this may be the right thing to do. But you can also do something yourself for the health and regeneration of the nerve function in the case of incontinence in your companion.

Brain, spinal cord and nerve cells form the nervous system, it controls the organism and enables it to perceive stimuli from the outside world. At the same time, it coordinates the internal organs and their functioning, such as breathing, digestion, body temperature and heart activity. All processes in the body are directly or indirectly controlled by the nervous system.

All the more fatal when specific nutrient deficiencies, increasing age or neuronal diseases lead to malfunctions of the nervous system. With the exact tuning of the filigree nervous system, tiny disturbances can have massive consequences.

To make matters worse, nerve tissue regenerates more poorly than most other types of tissue. The smallest malfunctions of the nervous system prevent the fast and error-free transmission of incoming or outgoing nerve impulses in the nerve tracts and thus quickly lead to symptoms such as incontinence.

Many of the symptoms mentioned are regarded as inevitable side effects of the ageing process, although they are mostly avoidable. Even in old age, when the regenerative capacity of the nerve cells decreases and the susceptibility to neuronal disorders increases, the nerve performance can be promoted by a targeted supply of highly concentrated B vitamins. The vitamins of the B group take on by far the most important role for the prevention of neural performance weaknesses and for the regeneration of already damaged nerves.

What can I do for my dog?

This is exactly where a high-dose (important) vitamin B complex can come in and effectively support the regeneration of the injured nerve pathways. With an early supply of vitamin B, injured and inactive nerve tracts can always be reactivated and regenerated before major nerve damage occurs. These reactivated nerve pathways are urgently needed to prevent a major breakdown.

Important to know: If injured nerve pathways remain inactive from the start, it becomes more difficult and costly to restore full nerve power due to the increasingly poor transmission of stimuli and impulses. So get active now!

Vitamin B for an intact nervous system

We developed the nutrient concentrate DOG FIT by PreThis® VITAMIN B to reliably counteract a decline in nervous performance due to an increased need for B vitamins or due to illness. Worldwide, it is a unique and highly concentrated vitamin B preparation that has been specially adapted to the special needs of dogs. As with all DOG FIT by PreThis® products, the raw materials are of the highest possible quality and are characterised by high bioavailability. The production takes place exclusively in Germany and is certified according to HACCP. You can be sure that you will only receive from us what we would give to our dogs ourselves and our standards are very high after more than 30 years of keeping dogs.

The most important advantages at a glance:

What is in VITAMIN B?

Like all our products, DOG FIT by PreThis® VITAMIN B is HACCP certified. Only the purest and highest quality ingredients are used for your dog.

VITAMIN B is very well tolerated by your dog. On the one hand, this results from the high quality of the raw materials, the certified production and, on the other hand, from the absence of known substances that can trigger intolerances. It is non-GMO, free from gluten, fructose, lactose and milk sugar. Regular use is not only possible without hesitation, we also recommend it. Because it also ensures that the vitamin B level remains constant and that your dog’s nerves can perform optimally even in old age. B vitamins are water soluble, meaning excess B vitamins are simply excreted in the urine. The dog takes what it needs.

To the DOG FIT by PreThis Shop