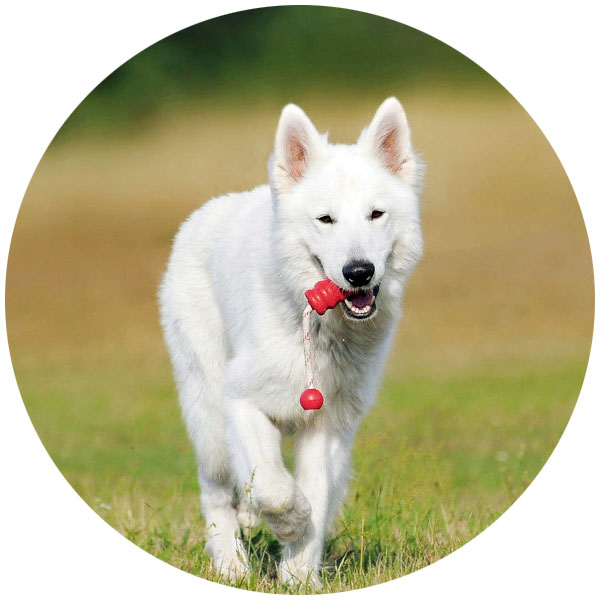 Colostrum is the so-called first milk, which is produced by a female mammal in the mammary glands immediately after the birth of her young. This extremely rich first milk serves the newly born animals as the very first food in their lives and, in addition to a high concentration of all the nutrients important for the formation of the young immune system, also contains the vital immunoglobulin for the formation of the antibodies that protect the young animals from pathogens. However, not only young animals can benefit from these nutrients, but also adult and particularly old dogs.

The different nutrients & Antibodies in colostrum

In all mammals, the body’s own defenses still need some time after birth in order to be able to develop fully. For this reason, newborn animals are very susceptible to infectious diseases immediately after delivery. However, nature has come up with a highly effective form of protection for this until the young animal’s immune system has fully developed and is able to independently fight various pathogens – the antibodies in the colostrum. These antibodies also offer very good support for the immune system in adult dogs, and older dogs in particular, which are susceptible to infections, can therefore only benefit from colostrum.

Furthermore, colostrum contains a high concentration of valuable proteins, vitamins, minerals and antioxidants to fight free radicals. Typical dog diseases that can be triggered by various pathogens can be effectively avoided and treated with the help of colostrum. A natural source of health to strengthen young and old dogs.

When should colostrum be given to dogs?

In principle, every dog ​​owner can administer colostrum to their animal, since the first milk effectively supports the body’s immune system. If a dog shows a reduced immune performance due to an illness or a strong stress (e.g. pregnancy) and an associated increased susceptibility to infectious diseases, it can also strengthen the dog’s natural defenses. Unfortunately, such an immune deficiency is quite common, since the diet through the common industrial feed unfortunately does not offer everything for the dog, as dog owners are often led to believe.

Avoid a nutrient deficit with colostrum

Many industrial feeds consist largely of slaughterhouse waste, fillers, grain, sugar and artificial additives, unfortunately there are only a few exceptions. So a nutrient deficit is pre-programmed, so to speak. What would happen if you ate fast food, ready-to-eat pizza, and microwaved convenience food every day? The answer is probably obvious. In order to avoid a deficiency, many dog ​​foods are enriched with artificial vitamins, for example, but these cannot replace high-quality food. Such additives are hammered into the dog owner as a sign of quality, but the opposite is the case. A really high-quality food does not need any additives, period!

In order for your dog to actually get what it needs, it would have to eat like a wolf. The wolf literally eats its prey skin and hair, giving it everything it needs. We can’t say it often enough, feed your dog appropriately and of high quality, because he only has you for it. You are responsible for his health!

Since the natural colostrum contains a very high concentration of all nutrients important for the dog, a nutrient deficit can be counteracted very well with the first milk, as it is characterized by a very high content of many important vitamins, minerals and proteins. An existing nutrient deficit in a dog’s body can also be compensated for in a completely natural way. In addition to the food, the age of the dog also plays a role. With increasing age, the absorption and usability of nutrients naturally decreases. In both cases, luckily we can help the dog. With natural feed supplements such as colostrum.

For the holistic health of your dog

Colostrum contains many bioactive ingredients such as the amino acid lysine, which is often used to help with infections. It also contains antioxidants that can neutralize aggressive compounds and thus reduce oxidative stress. The important L-carnitine promotes energy production in the body cells.

A very important component are the immune-regulating micronutrients, such as interleukin and peptides. They help to boost the immune system, but can also bring an overactive immune system (allergies) back into balance.

Dogs are lactose intolerant, some more, others less. However, the proportion in colostrum is very low and usually does not trigger any hypersensitivity reactions in a dog. Therefore, the colostrum can be administered without hesitation over a longer period of time and also permanently for health prophylaxis, optimal nutrient supply and for strengthening the dog’s immune system. Ultimately, every dog ​​can only benefit from its effects and enjoy optimal health through an optimally functioning immune system into old age.

The DOG FIT by PreThis® VITAL immun meets the highest quality standards and comes exclusively from selected farms in Germany and Switzerland. It is processed very gently in our HACCP ISO 9001 / 9002 certified production process so that all important nutrients are retained.

We only use colostrum that was obtained in the first few hours after the calf was born. Only about 10% of the colostrum from the suckler cow is used. There is more than enough left over for the newborn calf, we pay close attention to that!

In order to be able to guarantee a shelf life over a longer period of time, we offer our colostrum in powdered form in capsules. If necessary, these can also simply be opened, mixed with the food, or given in a treat. All ingredients guarantee the best DOG FIT by PreThis® nutrient quality with high bioavailability for the health and well-being of your dog.

Use the 5% new customer voucher for your first order: new