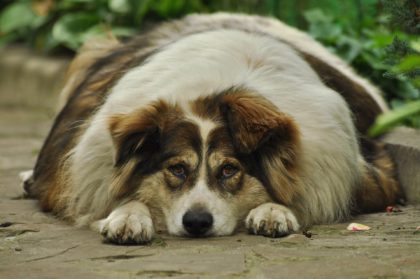 The diagnosis of being overweight applies not only to many people, but also increasingly to pets, especially dogs. Every second four-legged friend is considered too fat. And in most cases the reasons for this are the same for masters and mistresses and the dog – namely too little exercise, too many calories.

Obesity in animals, like in humans, is also a disease of affluence

Unfortunately, the problem is getting bigger and bigger. The German Animal Welfare Association also points this out. There is a study by the Ludwig-Maximilians-University in Munich which states that 52% of dogs and cats have too much bacon on their ribs. This has fatal consequences: Extra pounds can reduce the life expectancy of four-legged friends by up to two years. According to the veterinarians, the most common side effects are diabetes, liver damage, cardiovascular diseases, an increased risk of cancer and overloading of the joints.

Large dogs are particularly at risk of arthritis and joint problems

Due to their size, they are already strained in the joint apparatus. Every kilo less is a real relief. Dogs with short noses also suffer a lot from being overweight. The fatter they get, the harder it is to breathe. As a rule, misunderstood love and above all excess and ignorance play a role in overfeeding.

What can help if the dog is overweight?

What can be done is a combination of exercise and healthy food to get your four-legged friend back into healthy shape. Diet should be tailored to your needs. There is a large selection of high-quality but low-calorie dog food or special food. Maybe just use the treats as a reward and not for in between. A consultation is worth a lot.

Something useful to read – Some pet food stores also put out dog scales. The dog is simply led onto a large weighing surface. If he doesn’t want to, he gets a treat from the staff – as an exception.