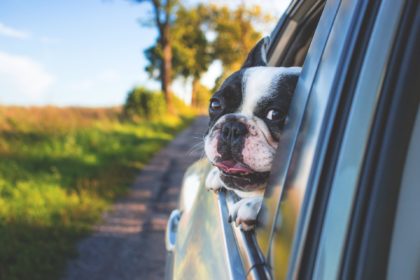 Dogs are like people, some make good passengers, others are not. But it doesn’t matter whether it’s a short trip or a long trip on vacation or visiting: The dog should feel comfortable in the car. He should have a safe place for that.

This includes showing consideration for the dog

Jerky starts, heavy braking and rapid cornering take away the balance of even a well-secured dog. So it may be that he learns to fear driving a car. Curses and insults at other drivers are also incomprehensible to a dog. Then he thinks you’re mad at him.

The dog should always have the same fixed place

In the back of the back seat or in the passenger footwell, or even on the passenger seat. And he should be able to lie down comfortably there. So the risk of nausea is the lowest. It can easily come from looking outside. It’s also more reassuring that way.

In the car you can secure your dog with a harness and a special seat belt. The strap gives him some freedom of movement, but tightens with abrupt changes in pace.
Small dogs belong most safely in a special transport basket, which should also be secured with the belt. Fasten your seat belt, even on short journeys!

Large dogs in particular are best accommodated in the luggage compartment of station wagons, SUVs or vans. Did you know that they are legally considered “baggage” so they must be safely stowed. The fabric grilles that some vehicles have will not withstand a dog being thrown forward. So the dog should be separated from the passenger compartment by a strong grille. Metal boxes, which are available in different designs, are even better for all car models. They protect the four-legged friend optimally against injuries in the event of an accident.

Get in and out only on command!

The dog should first sit quietly in front of the car before it can get in. Then give the order to board! Even when getting out, the dog has to stay in the car, the owner gets out before him, until the clear exit signal comes. This is important if cyclists, walkers and other dogs come. You also have to watch out for passing cars when it’s on the side of the road.

It’s better to keep calm in the car

Many dogs think it’s time to romp outside. They are very excited, whimpering and howling. Of course, this irritates the driver and is not without risk. You have to be adamant about that, so never let out as long as the dog is acting like a madman. Then he would be gone immediately. If you want to go outside, maybe take a break, or if you really want to romp, turn off the engine and open the door only when the dog is calm. Don’t get loud yourself, that just delays the whole thing.

Cars are not a place for dogs!

What is very important, it is said again and again and still done again and again, the car is not a storage room for the dog! If you quickly go to get rolls, that’s no problem. A dog can stay in the car for half an hour when shopping, with a little air supply and above all if it’s not hot! In summer, a dog should not be left in the car at all, not even in the shade. Even during the cooler seasons, the temperatures in the car heat up quickly when the sun is shining.