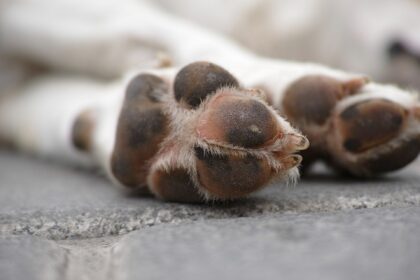 In summer, high temperatures can not only be uncomfortable for us humans. Animals also suffer from the heat and, like us humans, can get heat stroke. What is not so well known to many, especially hot asphalt is very dangerous for sensitive dog paws. Especially in the midday heat, the sun can heat up the asphalt enormously, so that a multiple of the air temperature is reached. At an air temperature of 25 degrees, the asphalt temperature reaches 45-62 degrees, at 30 degrees 50-60, at 35 degrees 55-68 degrees. Different floor coverings reach different temperatures. A study by Frostburg University shows that when concrete is 40°C, brick is about 43°C and asphalt is about 51°C when the outside temperature is 25 degrees.

There is a risk of burns for dog paws from around 41 degrees!

Basically, if possible, do not walk your four-legged friend on asphalt, especially not in the midday heat, rather in the evening, preferably only in the shade or on grass. The so-called 7-second test provides some help: Press the back of your hand on the asphalt for 7 seconds, if it gets too hot for you, you can’t expect the dog to do it either. Dog shoes can help, but many dogs don’t like them – understandably.

However, if the dog does burn its paws – the skin is red and swollen or blisters have even formed – then it is important to cool the paws immediately, for example under running water. In any case, go to the vet immediately! The paw is then cared for accordingly, provided with a bandage and it can also be protected with a sock.

Dogs are equipped a little differently than humans

Humans have cold and heat sensors in their skin all over their bodies. So we perceive where something is too cold or too hot. We then usually react very quickly – if the tar of the road is too hot, we withdraw our foot before minor burns can develop. However, dogs only have cold sensors in their bodies and not heat sensors like humans. This applies to the entire body, not just the paws. The only exception is the dog’s nose: this is also where dogs perceive heat. The dog will also sniff hot asphalt, but he’ll walk with his paws and not his nose, so nothing happens. However, the dog lacks the early warning system, i.e. heat that is perceived with the nose does not immediately mean that it could become uncomfortable for the paws. So he could burn his paws (or other body parts when sitting/down) before he realizes it. Only the pain receptors report the heat, but by the time the dog notices that the street is much too hot, it’s usually too late.

Did you know that temperatures of 20 degrees in the car can rise to 30 degrees after 10 minutes? This can be really dangerous for dogs! Therefore, please never leave the dog alone in the car in summer. Even leaving the window open or parking the car in the shade doesn’t help much! If there are helpful people around, the dog is lucky, a broken car window is often the result, but the dog is saved. Relying on others is of course absolute nonsense in such a case! There may also be an ad! Owners who leave their dog in the car in the heat or when the temperature is below zero can expect to be reported for animal cruelty. The legislator actually provides for a prison sentence of up to three years (in extremely bad cases) or a fine – and that is more than deserved!