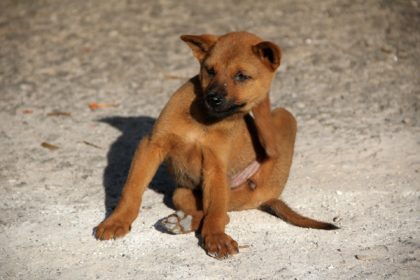 It is tiny and has many names – hay mite, autumn or peach lice, among others, and is orange-red in color. The scars of the autumn grass mildew are much more inconspicuous, but also more annoying. In late summer and autumn, these mites multiply very rapidly and develop masses of larvae.
They climb knee-high on plants and infest dogs or cats that roam by. They scratch the upper layers of skin with their mouthparts. In dogs, they most commonly affect thin skin areas such as the spaces between the toes, around the eyes and lips, the bridge of the nose and the auricles. As a result, the four-legged friend usually gets severe itching with reddening of the skin. This can later lead to the formation of pustules and wheals.

The mild Demodex canis is even more common

can cause the so-called demodicosis. This is one of the ten most common skin diseases in dogs. The mites settle deep in the skin in the hair follicles and multiply very quickly. The mites are usually transmitted from the suckling bitch to the puppies after birth. So this is mostly a disease of young dogs. Symptoms begin at sites of close contact with the mother. Hair loss in the eye area is typical, resulting in glasses-shaped hair loss on the face. The disease can also spread to other parts of the body. Then there is a special shape on the paws. Mostly on the front paws, which are inflamed and painfully swollen.

A third species of mite is the grave mite

It goes into the skin layer of the dog, multiplies there and lays its eggs. This is transmitted from dog to dog through direct contact. Age doesn’t matter. It is annoying that these mites can survive in the home for up to 18 days in the form of crusts or flakes of skin that fall off. It can even spread to humans. With closer contact between dog and human, mites can migrate. This can result in the so-called scabies.

In case of suspicion, go to the vet

He can provide quick help and prescribe anti-itch medication. Depending on the type of mite, preparations that also help against ticks are helpful. There are also special shampoos. The dog’s environment must of course also be made hygienically impeccable. This is also very important to prevent dog-to-human transmission.