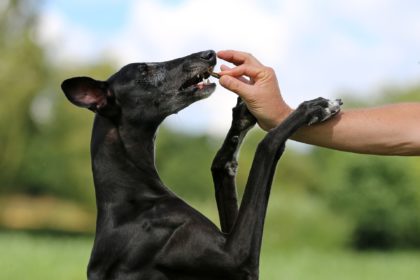 As soon as there is food, some dogs get into a riot. The attempts to get something off the plate are particularly bad. The fur noses can come up with many tricks to get a treat. They show the faithful wide-eyed look, nudge, lay their heads or draw attention to themselves loudly – the canine begging at the table is versatile.

The four-legged friend is not left behind

Anyone who gives in to their begging dog or doesn’t stop them in the first place will lose out at the latest as soon as their own dog grabs something off their plate when you’re not looking. But there is hope that the four-legged friend will learn table manners without any worries. With consistency and a little perseverance, even experienced food scroungers can still learn this.

It’s best to completely ignore the dog while you’re eating. But then everyone else sitting at the table should do the same. Sooner or later, the four-legged friend understands that begging is pointless because he doesn’t get anything anyway.

Show the four-legged friend who determines the mealtime

When it comes to eating, it is advisable to ask the dog to sit down during its meals and let it wait briefly before placing the filled bowl in front of it. Then you give him a command so that he understands that he can eat now and the dog asks permission beforehand, so to speak. This gives him to understand that not he, but his human determines the food and when he can eat it. A good tip was to read that this principle can also be trained with treats. Show the treats first, but only after a short wait with a command.

Another thing to consider:

Some dogs growl or snap when their master takes their food. This resistance is understandable, but it still makes sense to practice doing just that. Because dogs often want to eat something that is not allowed outside, such as leftovers, carrion or excrement. Unfortunately, these can also include life-threatening poisonous baits. You can practice this with a barter transaction, in which the dog exchanges what it has in its mouth for something better for it, such as a treat. But of course make sure that the beloved four-legged friend doesn’t get too many treats and ends up getting as round as a ball!