Can I do anything for my dog ​​with dementia? Yes, you can! 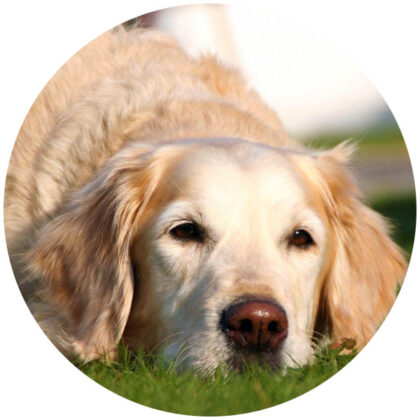 Dementia can also affect a dog, unfortunately I had to experience that too. What you can do for your dog in such a case, you will now find out from me.

Many years ago I read an interesting treatise on the “sickness of forgetting”. So called the neuropathologist and psychiatrist Dr. Alois Alzheimer in 1906 this hitherto unexplored disease. However, it took almost 100 years until this disease also played a role in veterinary medicine. It has been proven that, just like in humans, dogs can also suffer a loss of mental abilities. The condition is known as “canine Alzheimer’s”. Some symptoms are similar to humans. In dogs, they are usually dismissed as a sign of old age and only recognized as dementia at a late stage. This also explains why few dogs with dementia are treated early.

Cognitive Dysfunction Syndrome (CDS), also known colloquially as Alzheimer’s, does not appear in dogs until they are older. Proteins and fats in the brain can be damaged, resulting in the death of nerve cells. Unfortunately, as we age, the body’s ability to repair this damage is reduced. The first symptoms of senile dementia can appear as early as around 6 years of age in large dogs and around 10 years in small dogs.

The question of life expectancy cannot be answered in general terms. On the one hand it depends on the stage and on the other hand the course is different for many dogs. In the best case, your dog can be by your side for years until the disease unfortunately catches up with him. Statistically, one in four dogs will develop dementia, but there are a number of things you can do for your dog before and during the illness.

Psychologist Stanley Coren from the University of British Columbia in Vancouver researched the mental abilities of dogs. These are thinking, recognizing, learning, comparing, judging and imagining, the ability to draw conclusions and memory are also part of it. Dogs have both limited abstract thinking and spatial imagination, plus the information processing of prior knowledge. However, it is now the case that the demarcation between the natural aging of a dog and dementia is sometimes not clear. The following 12 points provide some orientation.

What can I do for my dog? 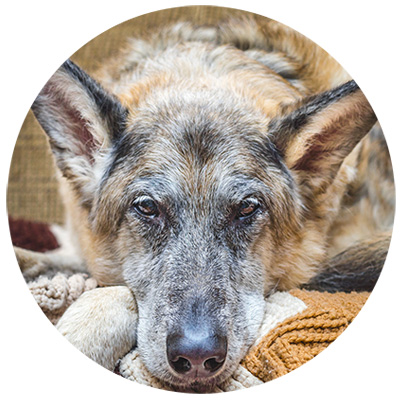 Unfortunately, dementia cannot yet be cured, but you can do something to prevent it and, in acute cases, to slow down the disease! First of all, high-quality food is of course important, please no industrial food, treat your dog to a really good and age-appropriate food with antioxidants and omega 3 and 6. If you have the time, please prepare it yourself.

Activity is important, even for dogs that are still healthy: contact with other dogs, intelligence and ball games, learning tricks, swimming and long walks keep the brain busy. If the illness has already broken out, reduce everything a bit and also give him fixed daily routines for his sense of security.

As written above, the nerve tracts and nerve cells, or their death, are largely involved in the disease. Conversely, it is important to know which micronutrients are significantly involved in the development, maintenance and regeneration of nerve cells. And these are the B group vitamins.

There is good news that you can do something for your dog. If the disease inevitably turns into an intensified dementia phase over time, make sure that your dog feels comfortable in a quiet and safe environment. Reduce the external stimuli as much as possible and give your old companion a lot of affection and love. He only has you!

How it all began

During my dog’s illness over 15 years ago, my team and I sought natural support for dogs with dementia. However, we did not find what we were looking for right away. It was because there were generally no preparations for treating dogs or they were not tailored to the needs of dogs. In addition, for these reasons, dogs were often treated with medicines from human medicine for a large number of diseases. Usually insufficient, rarely optimal and if so, then mainly on a chemical basis.

In conversations with alternative animal practitioners and veterinarians, we became aware of the connections between the B vitamins and the nervous system. Until then, however, there was no suitable vitamin B supplement for dogs. After further investigations, we jointly developed a vitamin B complex that was precisely tailored to the needs of dogs and dosed for the canine organism. This is how DOG FIT by PreThis® VITAMIN B came about. Although I was not able to stop my dog’s illness by taking it daily, I was able to improve it significantly at times and slow down the process. So I still had a few nice years with him until I had to redeem him.

Even back then, there were strict guidelines:

Also interesting to know: B vitamins also contribute to the normal functioning of the heart, energy metabolism, blood formation, hormone balance, psychological function, to reducing signs of fatigue but also restlessness and many other important functions of the dog’s organism.

Learn more about the additional advantages, the application and important tips.
Or would you rather go straight to the shop?

The advantages at a glance:

What is in VITAMIN B?

DOG FIT by PreThis® VITAMIN B is vegan, HACCP certified and corresponds to Feed Quality. Only the purest and highest quality B vitamins are used for your dog.

B vitamins per capsule(small / medium / large) 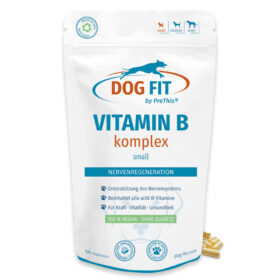 VITAMIN B is very easy to use and has an extremely high Acceptance.
Depending on its weight, your dog will be fed a small, medium or large capsule daily.

The capsule is preferably fed in a treat. The capsule ensures that the nutrients are only metabolized in the intestine and that nutrients cannot be lost in the stomach. You can also simply open them and mix the contents with the food. But then your dog gets an extra capsule per week to compensate for the loss. Please moisten dry food with a little water beforehand.

One can is sufficient for 2 months!

Please be patient with the effect. VITAMIN B is not a magic drug that can work overnight. Nerve cells need time to regenerate. But it is better to invest some time than to treat your dog with chemical preparations or nonsensical home remedies.

VITAMIN B is very well tolerated by your dog, it is certified in feed quality (like good dog food). Regular use is therefore not only possible without hesitation, we also recommend it. Because it also ensures that the vitamin B level remains constant and your dog’s nerves can perform optimally.

And here is your introductory bonus

VITAMIN B normally costs from EUR 27.95 (RRP), but thanks to our introductory campaign, you can get VITAMIN B from only EUR 21.95 in our official DOG FIT shop. Together with your 5% new customer discount code you can save a lot when buying your first can!

Remember: It only costs you from around 10 euros per month and from around 0.33 cents per day.

My team and I are happy to support you with our products in doing something good for your dog, so that many dog-typical clinical pictures can be avoided in advance or, in acute cases, treated naturally. If you have any questions, we are of course always there for you!