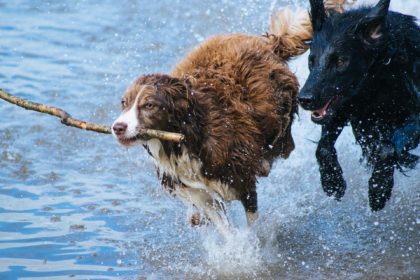 What can you do if a dog doesn’t get along with others? Who hasn’t it happened that during a walk you meet another dog with your human. One of the dogs barks and tugs wildly at the leash. In short, he gets terribly upset. It is often the case that the other dog then also starts to go crazy.
This is actually not entirely unusual behavior. Actually, ignoring goes a long way.

How did this behavior come about?

Sometimes a dog has had negative experiences with others and attacking was the best form of defence. It can also be that a dog is rather insecure overall and expresses this through increased aggression. The situation is almost always exacerbated by the dog owners. It is calmed down by nice words or even more violently. Unfortunately, according to the experts, this is often misunderstood by the dogs, namely as a confirmation of the current behavior. This increases the dog’s efforts to get started “right”.

The self-control of the dog handler is important

That’s just because of your own charisma. When you walk the dog and see the one coming the other way, your heartbeat speeds up because you don’t know what’s coming. As a result, according to the experts, the smell of people also changes. Stress hormones are released, which the other dog also perceives. Anyone who pulls the leash shorter out of fright, changes their step unconsciously, unconsciously gives the dog the command to attack. If the handler reacts relaxed because he assumes that he has the situation under control, the four-legged friend is too.